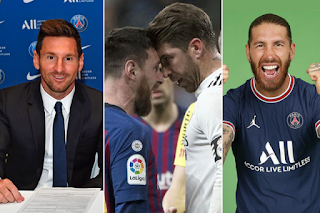 Lionel Messi's move to PSG has been made official, bringing to fruition several things that seemed nearly impossible a few years back – how many fans expected to see the Argentine in a jersey other than Barcelona's? One of the strangest things to come out from this transfer is the teaming up of La Pulga and Sergio Ramos.

For a long time, the pair had been arch-rivals on the pitch, with the Argentine representing the Blaugrana and the Spaniard donning the Real Madrid shirt in the always fiery El Clasico. No one can forget the rough tackles Leo suffered in his showdowns with Ramos.

However, the iconic attacker and center-back have now gone from rivals to teammates in one transfer window, which might take some time getting used to. Several jokes were made about what their first conversation would be like, but fans no longer need to wonder, as the first phone call between the former La Liga superstars has officially been revealed.

Their short interaction was recorded and made public by beIN Sports, who have close ties with PSG. In the clip, Ramos is seen picking up his phone and greeting his new coworker. Only Sergio's side of the conversation has been aired, meaning the entirety of the conversation remains uncertain. However, what is clear from the Spaniard's words is that their conversation was nothing short of warm and lovely.

"Leo… thank you so much, my friend," Ramos said while smiling and laughing.

"Come over, perfect," the 35-year-old added before saying "Allez Paris!"

"Thank you, Leo. See you later," were the defender's final words before hanging up. Watch their lovely interaction in the video below.

Speaking in his first press conference, Messi admitted to lacking full match fitness as he has not played a game of football in a month. However, there have been claims that he could make his debut in PSG's clash with Strasbourg this Saturday. Could that be the first match in which Leo and Ramos are named in the same lineup? Time will tell.