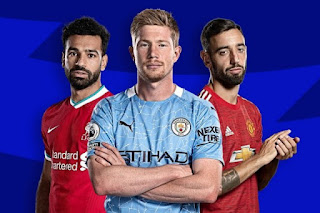 After a seemingly endless wait, the latest edition of the Premier League will get underway with 20 teams all striving to achieve different objectives. Some will be battling for the coveted title, others for a chance to play European football, while others will be battling to avoid the dreaded relegation fight. All in all, if past seasons were any indicator, the upcoming installment shouldn't be any less entertaining.

The 2020/2021 season saw Manchester City regain their league crown, while Arsenal at one point were in 15th spot after a horrible start and barely scraped into eighth, meaning that the Gunners missed out on European football for the first time since the 1994/95 campaign. Meanwhile, Chelsea narrowly scraped into fourth spot, pipping Leicester City by one point - but thanks to winning the Champions League, the Blues would have qualified even if they hadn't secured a top four spot.

Here's all you need to know ahead of the 2021/22 Premier League season.

How the Premier League ended last season - who will be playing where?

Here's a quick summary of how the 2020/2021 Premier League concluded, with what teams will be featuring in which competitions.

Champions: Manchester City clinched their fifth Premier League title by a comfortable margin, and as such, the Cityzens will be this season's reigning champs.

Champions League: Manchester City will be joined by Manchester United, Liverpool, and Chelsea in this season's edition of European club football's premier tournament.

Europa League: The Premier League's two representatives in the Europa League will be Leicester City and West Ham.

Relegated: Fulham, West Brom, and Sheffield United ended up being relegated to the Championship following their 18th, 19th, and 20th place finishes respectively.

Promoted: Norwich City, Watford, and Brentford will be joining 17 other teams in the top flight this season.

Top games you won't want to miss on matchday one

Brentford vs Arsenal: This match will be the official season opener, and it's safe to say that both teams will be doing their utmost best to get their respective games up and running.

Manchester United vs Leeds United: Another installment of the famous Manchester-Leeds rivalry will be in store this weekend, as the Red Devils, who finished in second, hope to kick off their campaign with a home win over Leeds, who impressed by finishing in ninth spot last season. However, the English giants are facing a crisis at the moment, with several key players not available due to injury or other issues.

Chelsea vs Crystal Palace: A London derby is in store as Chelsea, fresh off their win in the UEFA Super Cup, welcome fellow London-based side Crystal Palace. Will this game see Romelu Lukaku make his debut after securing a big money move back to Stamford Bridge?

Norwich vs Liverpool: Back in the top flight after a one-year hiatus, will Norwich, who still have Finnish striker Teemu Pukki in their ranks, get revenge on Liverpool after the Reds hammered them 4-1 on opening day during the 2019/20 term?

Tottenham vs Manchester City: This arguably will be the highlight game of matchday one, with Spurs, now under the guidance of a new manager, hope to cause a major headache for Pep Guardiola's men as the Cityzens seek to begin their title defense with an opening day win. But it won't be easy, especially with Harry Kane being a major if for this crunch clash.

Team news for matchday one

Here's who's out or in doubt for the opening day of the 2021/22 Premier League season: