Who will Valverde be supporting in the Supercopa? 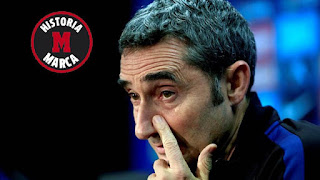 For Ernesto Valverde, Sunday night's Supercopa de Espana final will be extra special, but will he be supporting Athletic Club or Barcelona?

The man known as 'El Txingurri' - Basque for 'ant' - has not only played for and coached both sides, but was the last boss to win a trophy with either of them.

Athletic's Supercopa win, against Barcelona no less, in 2015 was Valverde's first trophy as a coach in Spain, having previously won three league titles and two cups with Olympiacos in Greece.

In 2017, he left Athletic for Barcelona and in his two-and-a-half years at the Camp Nou won two LaLiga Santander titles, one Copa del Rey and one Supercopa de Espana.

The 56-year-old could be forgiven, therefore, if his loyalties are somewhat split tonight when Athletic Club take on Barcelona in the Supercopa de Espana final at 21:00 (CET) in Seville.

It is likely, however, that Valverde will be pulled towards rooting for his boyhood club, Athletic, looking at comments he made shortly after leaving Barcelona.

"From every place you go, you take things to use in the future. I have been incredibly lucky to coach Barcelona," said Valverde.

"I know what it means to coach there from every perspective and I'm delighted to have been there. When you sign the contract, you know that everything depends on the results.

"However, Athletic has such a good environment that it's the best I have found in my career. I'm an Athletic fan and coaching the team you support and where you're from adds something extra to winning and losing."

Valverde has been out of football for a year now and, while he is keen to return to management, perhaps in England or further afield, he is enjoying the time off to pursue his passions of guitar, photography and cycling.