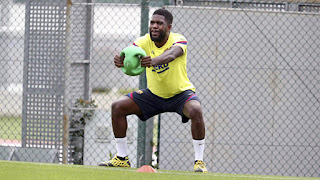 Barcelona and Ronald Koemanhave been given a boost ahead of their LaLiga Santander meeting with Athletic Club, with Samuel Umtiti returning to the matchday squad.

The former Lyon defender has been included in Koeman's squad list for Wednesday's match, after having missed the last fixture due to a stomach issue.

Carles Alena, though, will not be involved on Wednesday after being left out of the squad, although it's likely his loan move to Getafe will have been made official by that juncture.

Injuries have been a major problem for Barcelona in 2020/21, and Koeman will not be able to call on any of Ansu Fati, Gerard Pique, Sergi Roberto or Coutinho, with all four players out injured.

The Barcelona squad for the trip to Bilbao is as follows