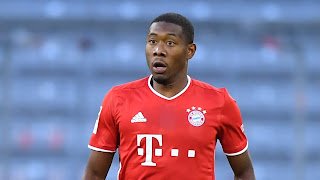 David Alaba has reached an agreement to join Real Madrid on a free transfer in the summer, bringing to an end an 13-year spell at Bayern Munich.

The Austrian’s dream has always been to play for Real Madrid and he will go there having turned down approaches from, among others, Liverpool and PSG. Bayern have made three separate contract extension offers but the player had made his mind up and wanted a new challenge.

A pre-contract agreement has been drawn up and will be signed after the player has passed his medical.