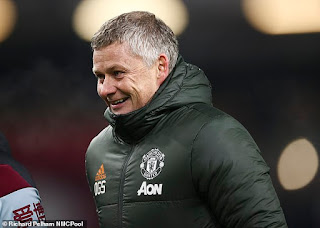 Ole Gunnar Solskjaer evoked the spirit of mountaineering to warn his Manchester United players not to become complacent now they have reached the Premier League summit.

United lead the way as they head to reigning champions Liverpool on Sunday afternoon in what will serve as an acid test of their aspirations to win a first title since 2013.

But their manager was at pains to stress that United have achieved nothing yet with the Premier League season not even at its midway point.

He said: 'There's been loads of hard work and loads of patience to get to the position we're in now, but it's like if you climb Kilimanjaro or Mount Everest and you get to the top and you sit down and relax - what happens then? You'll freeze to death.

'So now is the time to push on and go again. Thee is a definite shift in mentality of the boys that we believe we can go on to bigger and better things.'

Paul Pogba's winner at Burnley in midweek moved United three points ahead of Liverpool at the top. After Saturday's matches, Leicester are their closest challengers at just one point back.

Though Liverpool have been well short of last season's title-winning brilliance so far in this campaign, they still represent the toughest challenge of United's season so far.

Solskjaer is a veteran of many United vs Liverpool clashes from his playing days at Old Trafford.

'I loved it. I loved playing in big games, I didn't play many of them because loads of time I was on the bench coming on,' he said.

'I played when Diego [Forlan] scored a couple [at Anfield in 2002] and I absolutely loved the intensity of it and celebrating in front of our fans.

'I was on the bench when Pally [Gary Pallister] scored a couple of headers too [at Anfield in 1997].

'When there are fans there and you can quieten them down and the away fans are singing louder than the home fans then that's a great feeling. Now we don't have any home fans to quieten down, so it's a different mindset going into the game.

'I think the results over the last year or nine or 10 months or so have shown how important the fans are. The win-rate away from home compared to home, shows that the fans do play a big part in football and the passion that they give.

'I cannot wait to get everyone back but in the meantime, we'll do whatever we can to please everyone who is at home.'