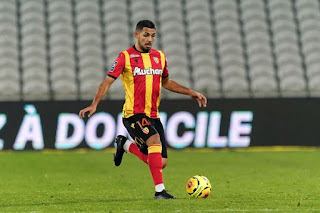 Medina, who plays as either a centre-back or left-back, joined the recently promoted Lens last summer for £3m from Argentine side CA Talleres.

The 21-year-old has impressed in the top flight of French football this season, with Lens sitting comfortably in mid-table.

Medina has recently recovered from a knee injury, and will be targeting a return to the starting line-up at Lens.

But according to La Voix du Nord, Premier League giants United are keen on the versatile defender, and are ‘very serious’ in their approach.

It is claimed that Ole Gunnar Solskjaer is seeking defensive reinforcements, and could pay more than £10m to land Medina.

Lens are not thought to be keen to let Medina go, and United could include a clause that allows him to see out the rest of the season in Ligue 1.

Arsenal took a very similar approach when picking up William Saliba from Saint-Etienne 18 months ago, with the teenager returning to his boyhood club on loan for a whole season after joining the Gunners.

Solskjaer recently admitted that it looked unlikely he would make any more additions his squad this winter, having already been boosted by the arrival of Amad Diallo.

"It's hard to predict how other teams (will act) and how the financial situation is,” said the Norwegian.

"If teams need to sell or if they've got money to buy. I don't predict a lot of ins and outs, to be fair.

"The world, financially, and in football, has changed as well also.

"It depends how the injury situations are at different teams.

"I feel very happy with my squad at the moment. We're getting stronger.

"I still have issues every week when we only get an 18-man squad to pick from. Who do you leave out? I feel I'm in a good position."