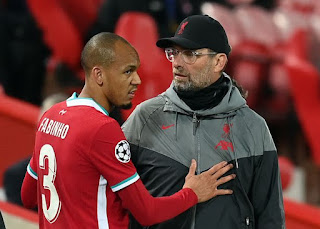 Liverpool are starting to toil in the Premier League after going three matches without a win.

It has allowed Manchester United the chance to leapfrog them into first, if they manage to get just a point from their game in hand.

The Reds have looked toothless in attack but they are also starting to feel the effects of the injuries to Virgil van Dijk, Joe Gomez and Joel Matip.

Fabinho and Jordan Henderson have been forced to go into the back four.

And rookie starlets Nat Phillips and Rhys Williams have also been thrown into the limelight.

Earlier this month, Liverpool legend Carragher insisted that his former club would be in serious trouble if they do not dip into the transfer window.

Carragher said on Sky Sports: “I can’t see Liverpool winning the league if they don’t buy a centre-back.

“I said that after the Everton game when (Virgil) van Dijk was injured but I think it’s a really tough ask if they don’t bring anyone in."

But Klopp has no plans to sign a defender this month after links to several players.

Dayot Upamecano, Ben White, Ozan Kabak and Sven Botman have all been rumoured to be interested by Liverpool.

However, it appears that the January transfer window will bypass those at Anfield with Klopp insisting he does not want any new players.

According to The Athletic, signing a defender 'makes no sense' to the German boss and the club do not want to be 'financially irresponsible'.

If any transfers are to go through, fans will have to wait until the summer before anything concrete comes to light.

RB Leipzig star Upamecano and Brighton's White have caught the eye on Merseyside.

But prising them away from their respective clubs will prove almost impossible, with Leipzig also facing Liverpool in the Champions League.

The Reds did contact Schalke over Kabak in November but were told to fork out £22m, which saw talks immediately tail off.