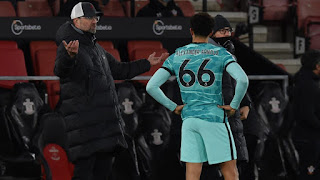 Jurgen Klopp was unhappy with some Liverpool defending and refereeing as the champions lost by the minimum at Southampton on Monday night.

Jurgen Klopp felt that Liverpool's defeat at Southampton on Monday night was down to an early mistake by Trent Alexander-Arnold and a failure to award his side penalties. A goal from former Reds striker Danny Ings in just the second minute was enough to secure a 1-0 win for Saints at St Mary's Stadium on Monday.

James Ward-Prowse chipped a free-kick into the penalty area and, after Alexander-Arnold failed to intercept, Ings looped a clever finish over goalkeeper Alisson. Liverpool pushed hard in the second half but only hit the target with one of their 17 shots, while they had penalty appeals waved away when Sadio Mane tangled with Kyle Walker-Peters and when a Georginio Wijnaldum shot struck the arm of Jack Stephens.

Those incidents rankled with Klopp, even though he accepted their poor start gave the champions a difficult task. "It made life massively difficult," he told Sky Sports. "The idea was nice but we have a player there who is able to hit the ball, and he misses it. All these things can happen to human beings, but as great as the set-piece is, we knew they would do it, we had a player there and missed the ball and then of course the next one is the finish. The possession we had, with the way we played, Fraser Forster should have had much more to do, but that's the situation we put ourselves in. We had a long, long spell in the second half where Southampton had nothing to do with the game, no counter-attacks, so that's good.

"But the best situations we had were when Sadio has the ball and then... if anybody will ever say again that Sadio Mane is a diver, it's the biggest joke in the world. This boy tries to stay on his feet," he continued. "Other teams will get a penalty for it, let me say it like this. Then the handball, I don't know who will explain that to me. That doesn't make our performance better and doesn't take anything away from Southampton, but in these situations we were unfortunate, at least."

The result ended a run of six consecutive league defeats for Southampton against Liverpool and marked the first time Ralph Hasenhuttl has ever taken points off Klopp in a league fixture. The Saints boss, who was clearly emotional at full-time, said: "I've never taken a point against Jurgen so far, so, I think I started believing we could do it in the 92nd minute and not earlier! The way we defended was amazing. The effort the guys put in, everybody, was key to winning. The mentality was maybe even better than this mentality monster team. It was an important step forward, I think."

Liverpool have taken just two points from their past three games and will be overtaken by Manchester United at the top of the table if the Red Devils win their game in hand.

"It's a rather rusty moment and we have to admit that," said Klopp. "Only if you know the problem can you solve the problem, and we are not blind to our problems. We just have to fight through this and play through this. That's with proper opponents around, they want to have points, I have to say the attitude of Southampton was exceptional. That's why we lost tonight and didn't have the results in the last few weeks that we wanted."