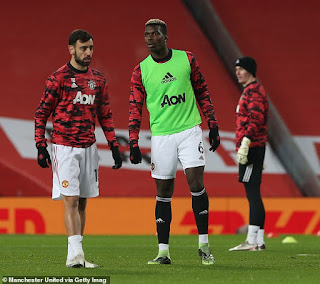 Bruno Fernandes admits he gets on well with Manchester United team-mate Paul Pogba and that the Red Devils need the Frenchman to achieve success this season.

Midfielder Pogba is enjoying a purple patch at Old Trafford this season, starting five out of United's last seven league games as they look to challenge champions Liverpool for the Premier League title.

Fernandes' arrival in Manchester, along with his excellent Red Devils form, meant Pogba started many games on the bench last season - but the Portuguese international admits the pair have enjoyed a good friendship over the past year.

Speaking to NBC Sport about his first 12 months at United , Fernandes said: 'The relationship I have with Paul is good. He speaks Italian and I speak Italian.

'When I arrived, he was injured. I saw him recovering and training on the pitch away from us.

Pogba and Fernandes have been on the pitch together 33 times in all competitions since the Portuguese international arrived in January 2020, with United avoiding defeat in 24 matches.

The Frenchman's preparations for the season were hampered by the midfielder catching coronavirus before the season started.

The 27-year-old admitted he 'couldn't run' and was struggling to breathe in training sessions as well as in Manchester United's defeat to Crystal Palace at the start of the season.

Fernandes claims he has sympathy for Pogba but admits the midfielder's goal against West Ham last month shows he is getting back to his best in a United shirt.

The Portuguese midfielder added: 'It shows you the confidence he gives to you, like when he comes back, he’s trying to help you become better and you help him to become better.

'We ended the season really well playing together. But of course the beginning of the season was hard for Paul because he had COVID.

'It was really difficult for Paul to find his form but I think he’s much better and feeling much more confident.  The goal against West Ham gave him much more confidence to understand. The team needs him and he has the quality to help us.'