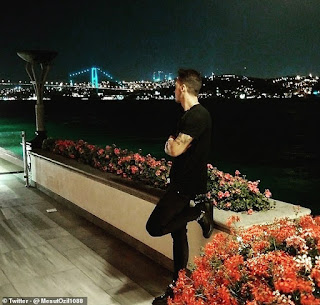 Mikel Arteta has said Mesut Ozil’s future at Arsenal will be resolved in the next few days, with the manager insisting he will keep the exiled playmaker if the right deal cannot be found during the January transfer window.

As reported by Sportsmail, Arsenal are trying to clinch Ozil's early departure this month. The World Cup winner was not included in Mikel Arteta's Premier League or European squads for the opening half of the season and has not played for the club since March.

His contract ends in July - but negotiations are underway from both parties to seal an early exit this month. 'I will decide what is happening in the next few days,’ Arteta said on Thursday.

'I don’t know what will happen, now he is free to negotiate with other clubs. We will discuss internally what is the best situation for him for the near future.

And obviously with the player and the agent and try to find the best solution for everybody.' Arteta added: 'If something is sorted this month it is because it is for both parties. It is good for Mesut and his future and good for the club. If that is the case we will move forward, if it is not the case then he will continue here.'

A number of influential members of the Gunners squad and staff agreed with Arteta's decision to axe the German amid concerns over his commitment. The Arsenal manager swerved a question over whether Ozil has played his final match for the club - or whether he could feature in their FA Cup clash with Newcastle this weekend.

'I think every player wants to play football, this is what we chose this profession and are so lucky to be doing what we do. For every player who is not playing it is always hard,' Arteta added.

'The decision needs to be made when you have to register players, when you have to play them or not play them all the time. We know we have a really important player and one of the key players in the past few seasons with the club. I have to make a decision. I made it. I knew the consequences of it.

'And now we will have to make another one in January and we will. We will balance what is the best for the club and the best for the team. And what are the intentions of the player and find the right solutions for that.'