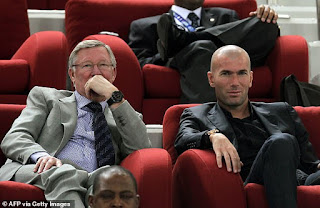 Zinedine Zidane has accepts he is not going to be Real Madrid's version of Sir Alex Ferguson and recognised how fragile his position is.

The Frenchman, who orchestrated a 2-0 win over Borussia Monchengladbach and Champions League progression on Wednesday night, understands the demand for the best at the Bernabeu.

It has been a tough start to the season for Real and they remain six points off leaders Atletico Madrid in LaLiga having played a game more.

'I want to enjoy and I don't know how long I'm going to stay here. I just think about how lucky I am to be here but I do not know until when! There are many years left in Madrid and I want to continue.'

Ferguson was Manchester United manager for 26 years having been put in charge back in 1986.

He led the club through an unprecedented period of success, winning 38 trophies and Zidane realises that patience at Real is not something the club is known for.

The former World Cup-winner is in his second stint in charge having previously led them to three Champions League victories in succession.

And there was huge pressure on the Monchengladbach game. A defeat would have seen them dumped into the Europa League and may have seen Zidane lose his job.

Clearly he is keen to continue as long as possible even if he is matter of fact about the chances of a long reign being slim.

There is still plenty of room for recovery this season but Real will have to spark an upturn in fortunes soon if they are to catch their neighbours in the title race.