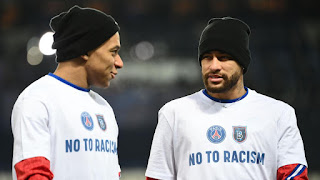 Neymar has not considered leaving Paris Saint-Germain, he claims, as the club continue contract negotiations with both the Brazil forward and strike partner Kylian Mbappé.

The world's two most expensive footballers have been in talks over new deals, with less than two years remaining on their existing respective agreements.

PSG confident on both fronts: Neymar and Mbappé

Signs have been encouraging for PSG, and president Nasser Al-Khelaifi said on Wednesday he was "very confident" and "both want to stay with us".

"The idea of leaving does not cross my mind. We have to discuss. We have a very good relationship. I am very happy and seeing what happens in the future"

Neymar was speaking after scoring a stunning hat-trick in PSG's 5-1 Champions League win over Istanbul Basaksehir.

The PSG number 10 netted with three of his eight shots, six of which hit the target, while he created a further chance along with a second assist for the fifth goal.

He now has three Champions League hat-tricks, trailing only Lionel Messi and Cristiano Ronaldo (both eight) in that regard, and became the first player to have scored 20 goals in UEFA's elite club competition for two different teams (PSG and Barcelona).

Victory belatedly secured PSG's spot at the top of Group H after the initial fixture the previous day was delayed due to allegations of racism against the fourth official.