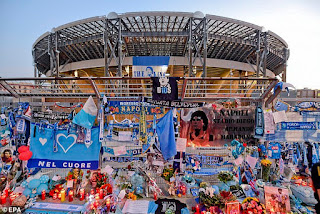 The Municipality of Naples officially confirmed the name change on Friday as the city continues to mourn the Argentine's passing at the age of 60.

Maradona spent seven seasons with the club between 1984 and 1991, lifting them to unprecedented success, including two Serie A titles, an Italian Cup win and a UEFA Cup triumph in 1989.

'With a resolution approved today, the stadium was named after Diego Armando Maradona,' the Naples municipality said in a statement.

'The resolution was proposed by Mayor Luigi de Magistris, by the Councillor for Toponymy Alessandre Clemente and signed by the entire city council, which met is Palazzo San Giacomo.

'Shortly before the executive committee meeting, the advisory commission for city toponymy had approved the proposal of the Mayor, the Councillor for Toponymy and the city council, naming the San Paolo stadium after Diego Armanda Maradona with the name Stadio Diego Armando Maradona.'

The team will next play at their newly-named stadium against Real Sociedad in the UEFA Europa League next Thursday.

Though matches remain behind closed doors in Naples, fans gathered in their thousands to pay tribute to their club icon prior to last week's Europa League game against Rijeka, lighting flares all around the stadium.

Banners to 'The King' were also hung inside the stadium, while scores of items, including shirts, scarves, pictures and candles were left at a shrine outside.

But the decision to ditch Saint Paul in favour of the 1986 World Cup winner hasn't gone down well with everyone.

A group of priests from Naples wrote to the city's archbishop Crescenzio Sepe this week protesting against the decision to rename.

'The Stadio San Paolo should be name after the saint who brought us Jesus,' the letter reads.

'With humility we feel the responsibility to tell you. We all agree on one thing: we don't want a clean slate. It would be fine to name the Stadium San Paolo-Maradona, like in Milan where there is the San Siro-Meazza.

'I would be the right compromise the save the faith and honour the champion.'