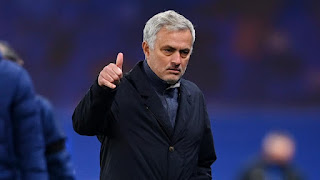 José Mourinho said Manchester United did not give him time to reach his goals in comparison with the patience shown towards Jürgen Klopp at Anfield.

José Mourinho suggested Manchester United did not allow him to achieve his targets as he pointed to Liverpool's patience in building a team for Jürgen Klopp.

Ahead of Mourinho's Tottenham visiting Liverpool in a top-of-the-table Premier League clash on Wednesday, the Portuguese had worked out Klopp had spent 1,894 days in charge at Anfield.

He also totted up his own time spent with Spurs to 390 days, as a means of comparing where the clubs were at in their evolution under each leader.

Mourinho hoped to be the manager to put United back on top of English football, but his Old Trafford reign turned sour and he was sacked in December 2018, midway through his third season.

Despite previous success at Chelsea, Porto, Real Madrid and Inter, Mourinho found he could not eclipse the likes of Manchester City in the time he was afforded with the 20-time English champions.

Mourinho: "I felt that I left in the middle of the process"

"In certain periods of my career and with the profile of club I was getting, we didn't need as much time to reach success," Mourinho said, addressing the question of managers being given time in football.

"We did it in Porto, Inter, Real, at Chelsea both times. We did it without that need of that longevity and also with my desire to try different things and my crazy desire to go to many countries, and to try to win and get different experiences.

"It was perfect because it was about winning and goodbye and let's try another thing.

"The first club where I felt I needed time and time was not given was at Manchester United, because I felt that I left in the middle of the process, but I learned very early to respect decisions, which I did at United.

"We did what we did and we did what it was possible to do and we move on. I am happy, they are happy, and we have a great relationship, which is something I am very proud of."

Since then, his team have the highest shot conversion rate of all Premier League sides - 15.47 per cent - and rank fourth in terms of points gained from a losing position, with a healthy 17 accrued.

They nk second only to Liverpool in that time in the number of goals scored from fast breaks, with eight to the Reds' 10 strikes.

This season they also have Harry Kane and Son Heung-min in devastating form, with Kane having a league-leading 19 goal involvements (9 goals, 10 assists) and Son totalling 14 (10 goals, 4 assists), in just 12 Premier League games.

"In Tottenham I know the profile of the job I have in hand and until now I'm enjoying being in the club," Mourinho said. "I believe that the club structure is also happy to work with me."

Significantly, Mourinho is planning a long-term tenure at Tottenham, which has not been a hallmark of his 20-year management career.

"I see myself staying for a long time," he said.

If success comes quickly rather than at the end point of a long process, as it might this term, Mourinho will not quibble.

He added: "If you can accelerate the process like we are accelerating, and doing good things like we are doing, then of course we are not going to waste time."