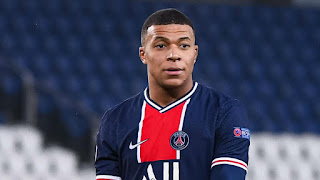 A double from Neymar put PSG in command of a tie being completed on Wednesday after it was abandoned in the 14th minute on Tuesday following accusations that a fourth official had racially abused Istanbul assistant Pierre Webó.

Mbappé made it 3-0 from the penalty spot after Neymar had been brought down, ending a wait for a Champions League goal that stretched back to December 11 last year.

The strike also saw him become the youngest player to reach 20 goals in the competition at 21 years and 355 days, surpassing Messi, who reached the tally at the age of 22 years and 266 days.

Meanwhile, Neymar – who completed his hat-trick in the second half – reached 40 Champions League goals with his second, doing so in 65 games. Ruud van Nistelrooy (45 games), Messi and Robert Lewandowski (both 61 games) are the only players to do so in quicker time.

Mbappé doubled his tally after the visitors pulled one back, as PSG – who were already through to the last 16 following Manchester United's defeat to RB Leipzig on Tuesday – sealed top spot in Group H.