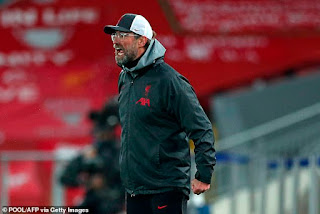 Jurgen Klopp has warned England will suffer at next summer's European Championships if the Premier League persist with the rule of three substitutions.

Liverpool manager Klopp has long advocated the need to increase the amount of changes possible to five, as was the case when football resumed after lockdown, and a number of his counterparts - such as Manchester City boss Pep Guardiola - have supported his views.

Klopp is concerned a schedule that will see the majority of teams play at seven times before the turn of the year is going to have an impact on the fitness of players, particularly those clubs who are also juggling European commitments.

It is inevitable there will be consequences in terms of injuries down the line but Klopp believes it will Gareth Southgate who pays the ultimate price as many England players will be exhausted by the time the tournament begins in June.

'I'm sure we will discuss it early again, because of the influence of three subs,' said Klopp. 'Now pretty much all teams have to play every three days, it will be massive for everybody from now on and every team will feel the difference. Next summer it will be a problem for Gareth Southgate.

'All of the players Gareth wants to pick play [European] football most of them, pretty much all. Most of them are playing three times a week, to do that from February, on again, and play three times a week all the time. Gareth will get what we give him if we stick with three subs.

'If we stick with three subs, he has a problem then, so it is an FA problem..' There was a Premier League shareholders meeting on Thursday and Klopp has criticised the Chief Executives who have voted against not increasing the amount of substitutions, claiming they are not interested in players' welfare.

'I told you about the facts,' said Klopp, whose side face Wolves at Anfield on Sunday. 'In the managers meeting [in November], if we would have voted that day, which we were not allowed to, it would have been through 100% with 15 or 16 votes, whatever.

'That it didn't happen since then is a sign some shareholders and CEOs and sporting directors see differently from their managers. That is not a good sign, really, to be honest. These people now really ignore player welfare. Coaches don't do that anymore but these people do it. That's not OK.

'If you don't have a chance to vote for it you have to accept it for the moment, but because it is player welfare, by the way, mental health and physical health, it is the full package, we will not stop fighting for it because it is just the right thing to do.'