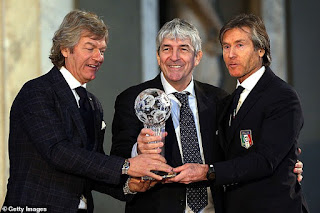 Paolo Rossi, the star of Italy's successful 1982 World Cup campaign, has tragically passed away at the age of 64.

The death of the former Juventus and AC Milan striker, who won the Golden Ball and Golden Boot in 1982 and made 48 caps for his country, was announced in the early hours on Thursday by Italian TV channel RAI Sport for whom Rossi had been working for as a pundit recently.

Rossi won two Serie A titles, one European Cup and the Coppa Italia during four years at Juve but it is his time for the national team which is most fondly remembered, as his six goals led Italy to victory in Spain 38 years ago.

'Unforgettable Pablito, who made all of us fall in love in that summer of 1982 and who was a precious and competent work colleague in RAI over recent years.