After just one win in six, is project Arteta doomed already? 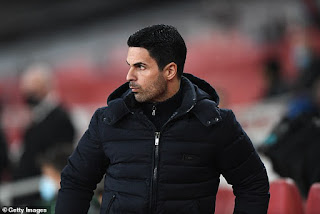 First things first: Mikel Arteta’s job remains one of the safest in the Premier League.

There is no hint of boardroom disgruntlement and only an epic capitulation of the Gunners’ season would alter that stance. And even that may not be enough to turn them. Arsenal are fully invested in Project Arteta.

They recognise his potential and are convinced that his career — and the club’s fortunes — will head in an upward trajectory.

But while the people who matter remain on board, others are starting to ask questions over Arteta’s lack of experience. This is his first managerial job after all.

Some are wondering whether an unwavering commitment to his brand of possession-based football simply isn’t possible with the players at his disposal.

A scan of social media would suggest some supporters are already convinced Arteta isn’t the man for the job. ‘So unjust’ was how Arsenal full back Hector Bellerin described those opinions on Friday.

Victory in Sunday's North London derby would go some way to appeasing what can be a fickle fanbase. The squad will be asking their own questions. How can a side who performed so encouragingly at the start of 2020 have taken such a downturn?

What they should not doubt is Arteta’s work ethic. The Spaniard is leaving no stone unturned in trying to arrest Arsenal’s alarming form. For instance, ahead of this season Arteta dispatched bespoke dossiers to Arsenal’s new signings so they understood fully what was expected of them.

Similarly, he spent the international break meticulously devising a strategy to get Pierre-Emerick Aubameyang firing again.

Concerned that his captain was spending too much time out wide, Arteta spent night and day hatching a plan to get his talismanic striker into central areas, where he causes maximum damage.

‘The way that Mikel plans these games... all the knowledge that he gives us before we step on the pitch is second to none,’ Bellerin said.

Not that it has worked with Aubameyang, who still hasn’t scored a goal from open play since the opening-day 4-0 win over Fulham.

Management must have seemed far simpler back then. Just a few weeks before that win at Craven Cottage, Arteta had led his team to a euphoric FA Cup win before defeating Manchester City in the Community Shield as hope sprang eternal. But just over three months later, Arteta is navigating negativity for the first time.

Doubts are emerging — and how Arteta deals with it all will be intriguing. One win and a draw in their previous six Premier League games leaves Arsenal 14th. They have scored just twice during that sequence, and one of those goals was from the penalty spot.

The fact arch-rivals Tottenham are top of the pile makes their predicament even more unbearable. Thursday’s 4-1 Europa League win over Rapid Vienna renewed hope that Arsenal are about to turn the corner. Nevertheless, as Arteta approaches the first anniversary of his managerial career, problems are building.

The difficulties on the pitch — particularly in front of goal — are clear. But delve a little deeper and you discover the problems are not confined to performances.