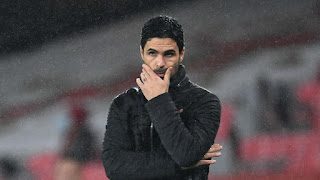 Arsenal are currently 10 points behind Southampton heading into Wednesday's Premier League home game, and Ashley Cole fears for them.

Ashley Cole believes Arsenal are heading for a fifth successive season outside of the top four unless Mikel Arteta gets to grips with the current crisis at the club.

A wretched start to the Premier League campaign has seen Arsenal drift to 15th place, losing seven of their opening 12 games including the last four at home. They head into Wednesday's game against Southampton trailing their visitors by 10 points, a staggering set of circumstances so early in the season that reflects both Saints' strong start and Arsenal's current malaise.

The omens for Arsenal looked good when Arteta's team, building on some positive results and lively performances, beat Chelsea in the FA Cup final at the beginning of August.  Yet the Spaniard, appointed last December, has seen his team struggle to capitalise on that success, and former Arsenal defender Ashley Cole sees only one way out of trouble: a sharp and immediate upturn in performance level.

"Now they can put Europe on the back-burner and start focusing on getting some points, playing better football and improving the league position," Cole told Stats Perform News courtesy of Nissan.  "They're up against some top teams in the Premier League so it is going to be difficult for them, but I feel if they can get through this moment and this tough period with some good games, some good results, then you never know. There's still a long way to go in this season, but when you're in the bottom half of the table, to get into the top four now, with the quality some of these teams are playing at, then I think it's going to be very difficult for Arsenal."

Until their slump of recent seasons, Arsenal had strung together 20 consecutive top-four finishes, meaning they were staple representatives of the Premier League in the Champions League.

Arteta's men have a dire shot conversion rate of 8.06 per cent this term, the third worst in the division, with captain and last season's top scorer Pierre-Emerick Aubameyang only scoring once for the Gunners from open play in the top flight.  His own goal at the weekend against Burnley may prove a nadir, given Aubameyang's undoubted quality, and Arteta must hope he begins scoring at the right end.  Arsenal are converting just 36.84 of the opportunities defined by Opta as 'big chances', down from a healthy 55.22 per cent last season.

Collectively, Arteta and his staff will be looking at all aspects of performance, and the smallest detail is unlikely to have escaped them. The team's passing accuracy into the final third is a matter of concern, given it has come down incrementally season by season from 76.38 per cent in 2015-16 to 72.18 per cent this term.

Perhaps most concerning of all though is Arsenal's failure to collect any points so far from a losing position. Until now, if you get ahead against the Gunners, you tend to stay ahead.