Fans will NOT be allowed to sing, shout or drink when they return to grounds 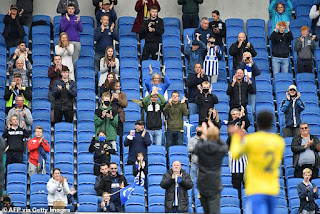